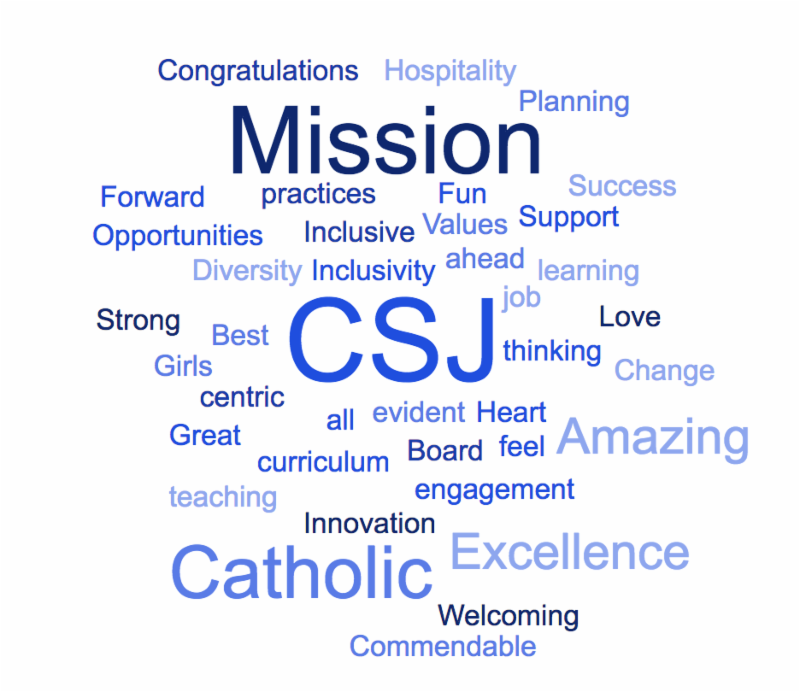 Join us for St. Joseph's Day and Founders' Day Mass

Please join us for St. Joseph's Day and Founders' Day Mass on Monday, March 19 in our Holy Family Event Center. If you're unable to join us in person, you can watch the Livestream of the event here.

Dust off your cowboy boots! Ask your dad or father figure to save the date: Friday, April 13th from 7-10pm. All 9-12 students are invited to a honky tonk country dance on our lovely OLP campus! You and your dad will have an awesome time learning some line dances and eating tasty fair-themed food. There will be awards for the best duo's dance moves and country-costumes! You are welcome to gather up a few friends and attend as a group with one dad. Join us for a boot stompin' good time! Attire: Country casual! Jeans and dresses are encouraged. (No bare midriffs, low-cut or backless tops, no shorts). Click here to purchase tickets!

The OLP Transportation 2018-19 form is live and spots are filling up quickly. Click here to fill out the form to sign up for OLP transportation for the 2018-19 school year. If you have any questions, please contact Toni Russo, Director of Facilities, at [email protected] or call (619) 297-2266.

OLP is again partnering with School Admin for enrollment of all returning students for the 2018-19 school year. School Admin online streamlines enrollment by integrating with your current OLP FACTS account and affords a central site for completing and submitting required forms for enrollment such as Contact Information Form, Emergency Contact Form, etc. The deadline to electronically sign your Tuition Agreement, pay your non-refundable registration fee and activate your FACTS account is Monday, March 19, 2018. Learn more.

Join us in Valle de Guadalupe!
Join the OLP Community on  April 22 for a family day in the Valle de Guadalupe in Mexico.  We hope you will join us for a bilingual mass in a beautiful outdoor chapel, followed by family-style lunch with music, all while celebrating OLP. This event is open to all OLP and Saints families, future Pilots, alumnae families, and their friends. Learn more and reserve your spot on our website.

Calling all writers and artists! Literary Magazine is currently accepting submissions. You may send a maximum of 3 submissions to Mrs. Gascho if you are interested. Send submissions to [email protected]. Include your full name, graduation year, and LIT MAG in the subject line. You will be notified by email once your submission is received and once again once it is approved. ALL ENTRIES DUE MONDAY, MARCH 26!

Are you interested in dance, voice, music, speech and/or film? Join the SD County Fair to participate in these great competitions! For more info, click here!

Apply to be a Link Crew Leader!

Any Sophomores or Juniors that are interested in applying to become a Link Crew leader for next year are invited to attend one of the two informational meetings. Come to Room 202 at lunch on April 9th or April 12th to pick up an application and learn all about what it takes to be part of the Pilot Link Crew! If you have any questions, contact Mrs. Hanley or Mrs. MacManus.

Peer Tutoring is Back!
Student tutors from our National Honor Society are available Monday through Thursday during lunch (12:05 - 12:50 pm) and after school (2:30 - 3:15 pm) starting February 5. Tutoring is being offered in almost every subject and there is no need to make an appointment, students can just stop by the Student Commons and our Peer Tutors will be happy to help! The schedule of when subjects are offered can be found here.
Athletics Announcements
This Week's Recap:
History Has Been Made!

After a long, hard fought battle to the end, the OLP Varsity Soccer team are State Champions! In the final game, they faced Flintridge Prep, the #1 seed. The game was played at St. Francis High School in Pasadena, CA where the Pilots left it all on the field. The game landed at 2-2 taking the teams into a 15 minute golden goal (sudden death overtime, first goal wins). At almost 6 minutes in, the Pilots were able to get control and after several beautiful passes between teammates, Erin Healy kicked in the final goal. Congratulations Coaches Kevin Soares and Tim Paluso and to the entire Varsity Soccer team on becoming OLP's first-ever State Champions!

On Wednesday, the archers had a double header. They beat Grauer High School 4-2 and La Jolla High School 5-1. Against LJHS, Cat de Frates '18 and Lily Lucero '18 swept their matches 6-0 and Natalia Valdez '20 debuted in team triples match. Against Grauer, Anna Hedberg '19, Cianna Yates '19 and Mary Corral '21 had outstanding focus with a team triples comeback win 5-3 and Isa Velarde '19 and Marian Isbell '19 shut down their opponents 6-2 in their singles match competition.

Lacrosse
JV: The Pilots kicked off their season with a double header against Mission Hills High School and their 2 JV teams. Lilly Connolly '20 scored the first goal of the season, while Isabel Wallace '20 had multiple stops in goal. On Monday, they beat La Jolla Country Day 6-1. Seney Larson Moreno '21 led the team with 3 goals and Wallace had another amazing game in goal, with 4 crucial saves. On Tuesday, they beat University City 12-1 led by Connolly with four goals. And Thursday, they had their third win for the week over Castle Park 12-1.
Varsity: Last Friday, the Pilots fell to La Jolla Country Day. Allison Stowe '19 had 16 saves in her first Varsity start as goalkeeper.  On Tuesday, they had their first league game on the season with a big win over University City 12-8. Bailey Gehler '19 with 8 goals and 1 assist and Taly Ferrante '21 with 4 goals.
Sand Volleyball
JV: On Tuesday, the JV Pilots had a 2-1 win over La Jolla Country Day.

Varsity: Last week, the Varsity Pilots gained two wins on Serra and Valhalla both 3-0. A Team, Olivia Gastaldo '18 and Eden Koria '19 won 2 sets to none against Serra and Kara Cato '19 and Olivia DiNapoli '19 had great sets against Valhalla. On Tuesday, they beat La Jolla Country Day 3-0. Caroline Belmontez '19 and Gabi Preciado '18 clench their second consecutive team win with a 2-0 victory over the Torreys.

JV: This week, the Pilots fell to West Hills 0-10 and Valley Center 7-8 . The Pilots have shown tremendous improvements already to play such a close game with Valley Center.

Varsity: Last Friday, the Pilots fell to Rancho Buena Vista 0-2 although they did well against this open division team. Marin Musicant '18 pitched an amazing game to Kayley Gibbons '18. On Tuesday they fell to Santana in a close 4-5 game. Musicant pitched another great game to Gibbons. Captain Kaleigh Lane '18, lead the team with a great game at the plate. Last night, they fell to University City 0-1. Kelsey Way '18 pitched a great game to Isabella Buckley '21. Natalia Frias '21 stepped up to the #2 spot in the lineup and batted .500 for the night. They have set a new tone for the softball program this year in their 1st year at the Division II level.
Swim & Dive